Most of Malaysian people already know and familiar with the story about the Karak Highway.  The road is reported as a haunted road and many fatal accidents involving fatalities occur on the road. Not only accidents, but many stories by the drivers that seen “something” on the route were also reported. 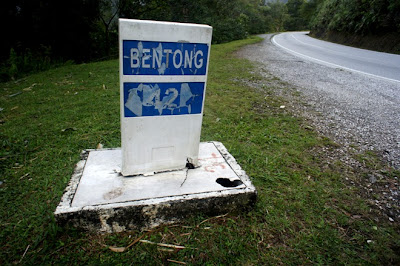 Karak Highway was first built in 1970 and first opened to the public in 1977. This highway connects Kuala Lumpur to Karak and about 60.0 km away. This highway has a pair of tunnels in the famous resort of Genting Highlands.


Among the most popular is an accident on January 20, 1990, in which 17 people were killed, including 11 people when FRU member suffered collision between a vehicle with a truck, a bus and 10 cars. According to the story, are many who want to avoid traffic jams follow the Karak old road (going back KL). But almost 80% of people here are not only night, even at the middle of the day blind had turned back. Reasons already can not stand to bear the horror!


Here is a list of common ghost appeared and became the talk of the nearest population:


· Yellow Volkswagen
· School Boy (wandering)
· Riders Motor (Head no body unavailable)
· Female Bring Son (tombstone)
· Pocong
· Old bus
· Elderly women
· Langsuir / Pontianak
· Ghost that attack people (some think it is a cryptid creatures)
From the various types of ghosts mentioned, just a few that popular and become the talk which are the yellow Volkswagen, pontianak, ghost that eat people, and the school boy. Here are some of true horror story in Karak Highway.


Story 1 : Mystery of the yellow Volkswagen
The story of a yellow Volkswagen cars that are considered haunted, which often disrupt travel around Karak highway. Yellow Volkswagen's ghost began to disrupt the vehicles on the road since 1956, but not significantly, and the public has yet to consider it something that need to care of.


The yellow Volkswagen would appear suddenly and if the driver is overtaking the car, it will be at the forefront of a sudden. It is believed that the accident occurred due to disruption of a yellow Volkswagen.
According to UIA student experience, coming from Gombak heading Temerloh with motorcycle had through and bumped with yellow car on the highway in 2009 in the evening at about 7:30. Because he knows the mystery, he just take baby steps and do not cut off the car. The car is traveling without a guide.
﻿﻿
﻿

Story 2 : School Boy (Wondering)
There are a few of Karak road users that "lucky" going to meet a boy who wanders around it. The boy said is looking for his mother. According to the story at one time there was an accident happened here. Believed the accident occurred because the passenger in the car was not cursing safety seat belt while driving. In the accident, the mother of the boy had been thrown out of the car. While the boy remained in the car. Because of it, the boy was wandering in search of her mother until now.


That is the story of a ghost boy who lost his mother and looking for her on the highway. Some people say when the accident happened, the boy who sat at the front, while his mother as a driver. In the accident, windscreen and glass pierced into the boy's eyes.

Story 3 : Ghost that attack people
Story begins when a family (a couple with a child about 2 years old) heading to the east coast and suddently their car died while over the Karak highway. So the husband try to check when there was smoke coming out from his car and he reliase that the radiator parched.

Initially, they just wait in the car with the hope that the PLUS patrol will come and provide assisstence but after a long wait, there was no vehicle through the road. So the husbad decide to find other alternative. He picked up a few bottles to search for water and ask his wife to stay in the car with their baby. The husband continued to drop down the highway to search for water.
Shortly after the husband away from the car to search for water, the wife shocked because there's something big fall and hit ​​the roof of the car. The car was shaking and sound like a wild animal is working on something. The wife embraced her baby in fear. Not long after the sound gone, the PLUS patrol came.
While ordering the wife and son out from car and asking the wife to follow them to the office, one of the officers warned the wife not to look back. The wife who still in shocked and want to know about her husband continue look back she saw her husband body have been torn violently at the roof of their car. The wife became insane after the incident.
According to the story that have been told by the PLUS patrol, when they doing their usual routine patrol they saw from afar a car stranded on the side highway. But when they closer, they saw a board resembling apes lord is perched at the top of the car while tearing on something. When they are getting close to it, the creature looking back and it jumped towards the adjacent forest. Then they went straight to the car to investigate the situation.
Many other road users had experiencing strange things along the Karak route.
Here have a link attached to read more on the haunted Karak Highway.